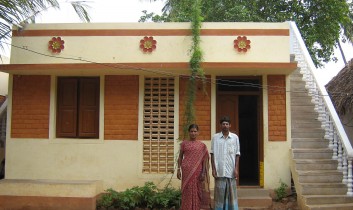 Housing has been one of the most successful initiatives of the Integral Village Development Programme. Prior to the initiation of this project, most houses in this area were in dilapidated, decrepit conditions, leaving people to endure the rigors of weather and other natural calamities, critters, and even antisocial and criminal-minded people. There was no sense of privacy among families, and the health of people was also at stake with non-existent or inadequate roofs over their heads.

The Village Programme initially helped in constructing and renovating houses for the needy. The fund that the Village Programme provided for the constructions was in the form of loans and not grants, in line with the Trust’s aim to make the villagers self-reliant. Most of the loans have been recovered. In fact about 90% recovery rate has been achieved, which was due to the financial responsibility, ownership, and pride factor felt by the people of the villages.

The Village Programme’s volunteers also realized that though there were a number of government programmes and schemes for the poor to apply and receive loans for housing and other needs, most of the rural population was unaware of these programmes. This led to these funds being misused and underused. When the Village Programme started to educate the local citizenry, it brought in a radical change in the hitherto casual process of selection of the beneficiaries for the government housing schemes. The selection process is now fair, equitable, and much more effective.

Inspired by the movement, many of the people of the village have also taken up the initiative to improve their houses by constructing with better, stronger materials, applying for loans to other agencies and government organizations for the same. Village housing committees were formed by the Village Programme to identify beneficiaries, help in the construction, and monitor progress of on-going construction projects.

The housing initiative has demonstrated a sea change in the attitude of the people of the village towards self-reliance and also brought in awareness of rights and a sense of pride and dignity in the families staying in the newly constructed or renovated robust and secure houses. We look back with satisfaction that the importance and visibility given to the housing programme during the previous years has brought about a social and communal change in the families and households. Overall, health and education have improved. People are now more knowledgeable and demanding of their rights vis-à-vis the government schemes and the programmes specifically aimed for them. The aspiration to own a house and to take the effort of saving money for it by working harder is increasing, thus, leading to improved earnings and saving habits also.

Being a fund-intensive activity, the Village Programme has discontinued the construction of new houses. It is now facilitating people to effectively utilize the government housing schemes by following the housing model created in the previous years. However, it continues to help families in distress to renovate their houses. Whenever required, the Village Programme continues to administer and guide the construction of houses and help in the selection of beneficiaries for government schemes.

The far-reaching and deep-rooted impact of the Programme is also felt due to the very encouraging and active involvement by the village housing committees and also the local administration‘s requests to the Village Programme to help them in implementing the government housing schemes for the villages.