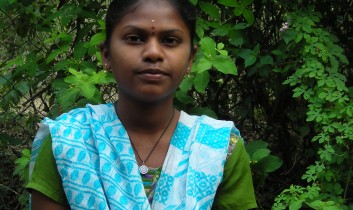 At the Poothurai village, a part of the Integral Village Development Programme, excitement spread as the results of the board examinations for the 10th standard were announced. Each one of the 37 students who took the exam had passed, 7 had scored above 90% and, overall, 19 students got scores above 75%. This was especially significant considering that almost all the parents in the village are illiterate, and that till 2 years ago, only about 15% of the students passed. (Read the News Article)

Poothurai was especially proud of one student, Vijayapriyadharsini, who earned the highest marks of all the 22 schools in the block. Interestingly, all the top three positions went to girls this year. Of special note is that two students received 100% marks in Science, two scored 99% in Social Studies and one earned 96% in Tamil.

The credit for these exceptional results belongs to the hard work of the students, aided by the Integral Village Development Programme and the Children’s Corner tuition programme. Programme coordinators, teachers and students arrive at the community center at 5:00 am to study for two hours, and return again after school for additional tuition from 4:30 to 7:00 in the evening.

This year was a particularly challenging one, with the start of the year being fraught with controversy and conflict as the courts debated legal challenges pertaining to the newly rewritten textbooks. The syllabus and textbooks were not formalized until two months after the start of classes, resulting in the loss of a significant amount of time. Students, teachers and tuition coaches had to work extra hard throughout the year to make up for this loss—including conducting and attending extra classes on Saturdays and Sundays.

In the middle of the year, two students were ready to give up in the face of the mounting pressure and workload. The Programme team helped convince them to continue until the exams, and provided extra support for them. Now both are very happy and proud, having scored above 70% and thus earning a better future for themselves.

Another girl, the daughter of a village head (who himself is illiterate), was able to progress from exam scores averaging near 20% up to final marks of over 60%. Her father, at one time a bit hostile to the Programme, acknowledged and appreciated its role in the success of his daughter.

With our Integral Village Development Programme, we are now hoping to extend support to the recently promoted 11th and 12th standard students in the tuition programme and to continue support for new group of standard 10th students to reach their highest potential.