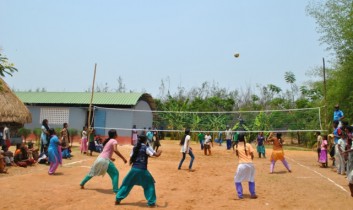 A new approach to sociological change

The Sarvam Trust (registered UK charity) is part of the established NGO Sri Aurobindo Society.  It was set up in 2005 with the mission to bring about integral village development in a sustainable, replicable and scalable way.

Leading Indian actress Hema Malini is an Ambassador of The Sarvam Trust.  She says: “Having grown up in India, I have witnessed first-hand the seemingly never ending cycle of hopelessness in too many villages.  The Sarvam team has intercepted this cycle in two communities and the results have been amazing.  I am so excited to see this interception happen elsewhere.”

About The Sarvam Trust

Initially working with two of the poorest villages in the Villupuram district of South Indian state of Tamil Nadu, Poothurai and Perambai, Sarvam aims to use this bottom up model to not only inspire change in other villages across the subcontinent, but also internationally.

The core Sarvam team spent time building relationships with the communities to find out what they wanted.  They have acted as a catalyst for change across education, housing, health, social and economic progress, focusing primarily on women and youth.

Health camps have been set up, school infrastructures improved, computer centres established and sports, arts and culture clubs created, to name but a few of the initiatives spanning all aspects of living.  Seven years on, results show higher pass percentages and levels of employment, improved infrastructure and better health.

Using media as a vehicle for positive change

Turning the theory that media is used largely to deliver negative news on its head, ‘New Village Dawn’ (Grama Pudhiya Udhayam), monthly newspaper in Tamil, was set up in 2007 produced by the village about the village.  With minimal support from Sarvam, the newspaper is almost entirely managed by the village youth to celebrate and drive further change from within.

“With an estimated 70% of India’s population living in villages, the continual development of the nation will only be possible if rural communities are empowered to change from within” – Vijay Poddar, Chairperson, The Sarvam Trust.

About The Sarvam Trust (www.thesarvamtrust.org)

Set up in 2005, The Sarvam Trust facilitates and supports the charitable work of Sri Aurobindo Society, India, working towards an integral transformation of human conditions, by effecting sustainable social and economic changes. This is accomplished by bringing about a change in the mindset and consciousness of the individual and the community as a whole, and encouraging it to manifest in a diverse way and in all fields of life.

Sri Aurobindo Society was established in 1960 is registered as a society at Kolkata (formerly Calcutta), India, under the Societies Registration Act of 1860 (now West Bengal Act XXVI of 1961). The main administrative office of the Society is in Puducherry (formerly Pondicherry). The Government of India has recognized the Society as a not-for-profit Organization under Section 80G of the Indian Income Tax Act, a Research Institute under Section 35(1)(iii) and an Institution of National Importance under Section 10(23C)(iv) of Income Tax Act.